TEXA continues to build upon the best multi-brand diagnostic software in the on-highway trucking industry. If you are currently within your first 12-months of ownership or have purchased a support package, you are entitled to receive this software upgrade for free. If you have previously purchased a TEXA truck kit from Diesel Laptops and are not within support, you are missing out on some other amazing free software, including:

TEXA continues to work “down” to smaller engines, and in particular the Ford Transit 3.2L, 3.5L, and 3.7L engines. This include bi-directional commands such as Misfire test, power balance, relative compression test, reset KAM, and much more.

The Freightliner body and chassis controller side has been significantly updated as well. This includes commands for systems such as the bulkhead module (BHM), instrument cluster unit (ICU), central gateway (GTW), switch hub (SHM), and chassis module (CHM). This includes commands over 70 bi-directional commands such as A/C clutch activation, exterior & interior light testing, wiper and washer system testing, and many more. The system can also read more than 800 live parameters along with complete fault code reading.

This latest version of TEXA software is now tested and validated on International engines up to model year 2018. The TEXA software contains 100% of the bi-directional commands that you would find in ServiceMaxx or NEDS, and the system from Diesel Laptops contains step-by-step troubleshooting guides, wiring diagrams, and much more.

For version 44, TEXA has expanded the Mack and Volvo coverage both forwards and backwards. The original Generation III Mack ECMs from the late 90s and early 2000s has been expanded to include new commands and test. Most noticeable is that the high-pressure pump calibration and programming has been developed.

TEXA has also become the first software program to support the 2018 model year Mack and Volvo Trucks. This includes not only the diesel engine dealer level commands, but also the other sub systems such as radio, anti-theft, door modules, climate control, IShift transmission, body controller, and many more.

Sprinter trucks have been sold under 3 different manufacturer names over the years. This includes Mercedes-Benz, Dodge, and Freightliner. In this new update, TEXA has added more parameter reading for Sprinter 2500 and 3500 models running the OM642 engine. These are systems running the EDC 17 CDI60 electronic control module, and mainly are in regard to the selective catalytic reduction systems (SCR).

We still feel strongly that TEXA offers the best multi-brand truck diagnostic software today. We also have created a very unique kit that only Diesel Laptops offers. This includes repair information, labor time guide software, wiring diagrams, technical support, GPS tracking of your laptop, and much more. You can learn about the Diesel Laptop difference or visit our web store for more information. 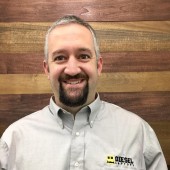 Cover Your Ads with Diesel Laptops